The benefits of LED lighting transcend nations, cultures, and levels of socioeconomic status. People living in the developing world are benefitting from replacing kerosene with safe LED lights so they can work at night and their children can do their homework without the risk of fire and inhaling toxic smoke. Commercial enterprises are reaping the benefits of safely and efficiently lighting their workplaces, manufacturing facilities, plants, warehouses, parking lots, and more while saving money at the same time.

In 2014 when the Nobel Prize Committee awarded Isamu Akasaki, Hiroshi Amano, and Shuji Nakamura the Nobel Prize in Physics for the development of the light emitting diode or LED, it wasn’t just because these scientists had invented some really cool lights.

It was, in the words of the Committee, because LEDs “hold great promise for increasing the quality of life for over 1.5 billion people around the world who lack access to electricity grids.” And not only have LEDs transformed the lives of people in the developing world, commercial LED lighting is transforming businesses in a variety of ways.

While there are dozens of reasons why you should make the switch and ditch outdated traditional lighting at your facility (if you haven’t already), here are 16 advantages of LED lighting and why you should switch now:

1. LED lights last much longer than incandescent and fluorescent bulbs.

LED lights can reliably last more than 50,000 hours, and in commercial environments, they’re known to last even longer – more than 100,000 hours. This can net out to a lifespan of 11 years if burned 24 hours per day, seven days a week.

The following chart from Bulbs.com shows the average lifespan of different types of light bulbs. As you can see in the chart, an LED bulb can outlast any other light bulb by wide margin.

An LED light bulb doesn’t just last longer than its counterparts – it’s more durable. Compared to a fluorescent or incandescent light bulb, LED lights do not break easily. This makes LED lighting options ideal for commercial environments, such as in warehouses and manufacturing facilities.

LED lighting offers cost savings for businesses on a number of levels. While LED bulbs are more expensive than halogen, incandescent, or fluorescent lamps, they last much longer, thus providing savings over the long term. In addition, as the adoption of LED lighting grows, prices continue to drop.

But the savings don’t stop there. Because LED lights last longer, the bulbs don’t have to be changed for years like conventional light bulbs, so overall maintenance costs are lower. Your business saves on labor hours, and workers can focus on more important issues than changing light bulbs.

Furthermore, because LED lighting is far more energy efficient, businesses can save money on utility bills and take advantage of incentives offered by utilities for implementing energy efficiency upgrades.

Even bigger savings come in the form of LED technology provided via an Energy as a Service (EaaS) model. With EaaS, commercial enterprises can take advantage of LED technology in the same way they do their internet service. Your business can “rent” the LED lights and equipment from the Energy as a Service provider and simply pay a monthly subscription for the energy used.

The EaaS model lets businesses take advantage of new tax laws that allow them to treat subscription-type lighting and energy costs as off-balance-sheet expenses rather than capital expenses that have to be depreciated over time. Subscribing to an LED EaaS program, like that offered by U.S. Energy Recovery, keeps debt off your books and lowers your energy bill.

For commercial enterprises that need lighting for extended periods of time, whether it’s long working hours, for safety and security in a warehouse or manufacturing facility, or for other uses, switching to LED lights can save millions of dollars annually.

For example, U.S. Energy Recovery clients save about 20-55% on their electric utility bills alone just for swapping out old lighting systems for state-of-the-art LED lighting.

This chart, provided by the DOE, compares the energy usage of different types of light bulbs: 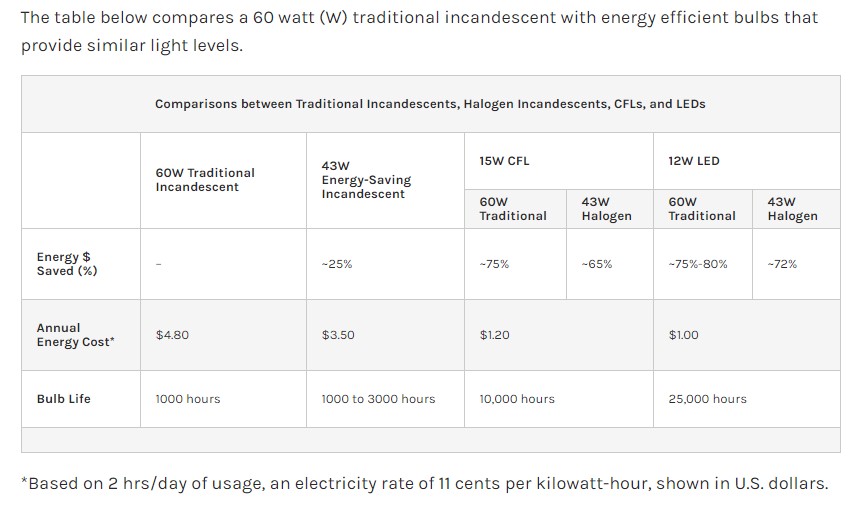 Unlike traditional conventional lighting, LED lighting technology emits very little heat. This means LED lights can be safely left on for extended periods of time. In addition, they reduce the need for cooling in an environment, whether it’s air conditioning in an office or fans in a manufacturing facility.

Safety should always be the top priority of any organization, and when it comes to lighting, the safety risk is heat and fire. The vast majority of power that is used by incandescent bulbs is producing heat vs. light. And the heat intensity increases the longer the bulb is in use. LEDs, on the other hand, emit very little heat no matter how long they’re used.

The reduction in cooling loads offered by LEDs adds to their energy cost savings. In the example of U.S. Energy’s commercial clients, they experience energy savings in the range of 35% as a result of reduced cooling loads.

In addition, LEDs can operate on low-voltage electrical systems, which adds to their safety aspects.

If you’re interested in how much your business can save with LED lighting and better controls, try out U.S. Energy’s energy savings calculator.

Energy production is one of the leading contributors to greenhouse gas emissions. Yet the energy efficiency benefits of LED lighting helps reduce the amount of greenhouse gases in the atmosphere. With energy savings of up to 80% compared to traditional lighting, LEDs help commercial enterprises operate in a more environmentally sustainable way while simultaneously saving them money.

Studies show that running a “green” business is good for business. In a report by market research firm Nielsen, 72% of Baby Boomers (age 50-64), 79% of Gen Xers (age 35-49), and 85% of Millennials (age 21-34) say it’s “extremely important for businesses to implement programs to improve the environment.” So, in addition to cost and energy savings, installing commercial LED lighting in your facility is a great PR and marketing move.

One of the simpler benefits of LED lighting for commercial spaces is that it can emit a white color that’s similar sunlight or a warm color like a sunrise or sunset. So, the quality of lighting offered by LEDs can create a better overall experience for employees and customers alike.

LEDs provide instant brightness to an environment without any flickering. They work extremely well in environments where lights are turned on and off continually within short periods of time. This operational speed coupled with superior controls makes LEDs work especially well with motion sensors, such as those used outdoors, or in warehouses, office spaces, and hallways. 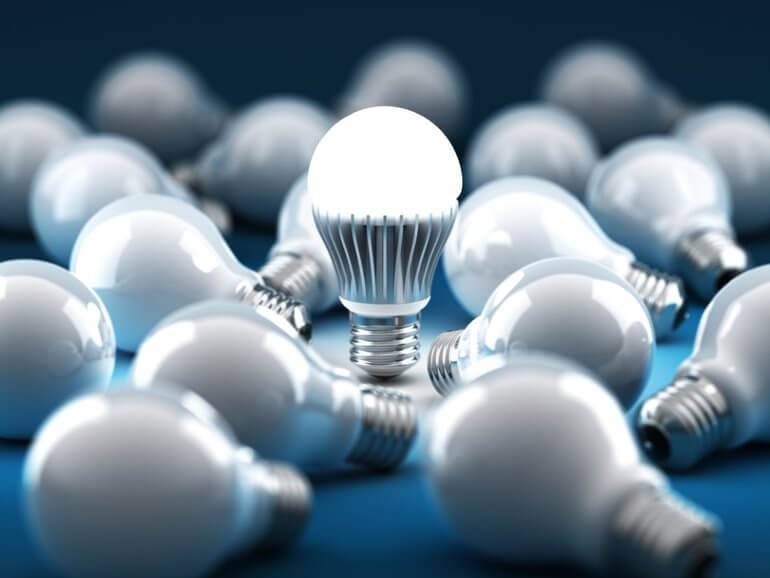 Another advantage of LED lighting is directed at commercial environments due to the higher level of control it gives to users. LEDs provide precise directional control, so you can point lights in exact locations without excess energy being wasted where you don’t need lighting. LEDs emit more “focused” light at 180 degrees vs. traditional lights, which emit light at 360 degrees.

LED lights can also be dimmed or can be adjusted to the ideal level of brightness and color desired through a process called color tuning. As natural sunlight changes throughout the day, LEDs can be put on automatic controls that adjust as lighting demands change, thus adding to the workplace mood and environment. The ability to dim LED lights means that businesses have added control over how much energy they use according to lighting needs.

8. LED lights come in a wide variety of colors.

LEDs have superior color rendering capabilities, which makes them extremely flexible for use in a variety of commercial environments. The color versatility means LEDs can be used in a range of applications, such as in signage, displays, overhead lighting, colored spotlights, and more.

10. LED lights can be turned on and off quickly.

Unlike traditional lighting, which can take time to warm up, LED lights can be turned on in nanoseconds, so users get adequate lighting immediately. This makes LEDs ideal for outdoor lighting, lighting in hallways and office spaces, manufacturing facilities, traffic and warning lights, and elsewhere. In addition, frequently turning LED lights off and on doesn’t degrade their life expectancy in the way it does traditional incandescent and fluorescent bulbs.

LED lighting is particularly useful in environments where objects can degrade under ultraviolet lights. This is because the illumination from LEDs produces little to no UV light and very little infrared light. For example, museums can benefit from LED lighting, which helps to preserve the colors in paintings, tapestries, and other objects.

While LEDs do contain some lead and other chemicals, they’re free of mercury, which is toxic and can be found in traditional light bulbs. LEDs are not considered toxic by current U.S. laws and can be disposed of in the landfill.

14. LED lights can be recycled.

LEDs contain electronic components, including semiconductors, as well as glass and different metals, which can all be recycled. While most municipal recycling centers do not yet have specific programs in place for recycling LEDs, Energy as a Service LED lighting retrofit contractors, like U.S. Energy, have their own recycling programs in place. This takes the responsibility of recycling off of clients’ shoulders.

15. LED lighting takes up less space in your facility.

LED lights can come in extremely small sizes, smaller than 1/10th of a square millimeter. And because they emit so much light, even in small sizes, they take up less surface space, which makes them ideal for commercial environments that are trying to conserve space.

When we think of the benefits of LED lighting, noise is usually not at the top of the list. However, traditional fluorescent lighting can actually be quite noisy, and the buzzing noise level escalates the longer these lights are in use. LED lights operate silently, thus minimizing the distraction of non-essential noises that can detract from workers’ productivity or your customer experience.

It’s not common for a technology to come along that offers wide sweeping benefits for commercial enterprises. But LED lighting is one of those rare exceptions. They definitely fall under the category of no-brainer for all kinds of businesses and other organizations that want to run more efficiently at less cost, while providing an optimal environment for workers and customers.

Those are the key benefits of LED lighting, proving why they are considered an impactful lighting solution and why the audits for LED lighting retrofit projects have been rising.

Ready to make the switch to energy efficient lighting?

If you’re fed up with flickering lights, dark spots, lighting maintenance headaches, and above all else, seeing an exorbitant amount of your budget being spent on electricity we want to help you get the lighting you need.

Many of our customers, including Swift Transportation, the largest full-truckload motor carrier in North America, saw the real benefits of LED lighting and hence have made a substantial energy savings after partnering with us, not to mention have taken a positive step towards reducing their carbon footprint which is a bonus.

Contact us to learn more about how we can help you find the ideal lighting situation for your facility! You can also check us out online: usenergyrecovery.com.

The ACEEE Utility Energy Efficiency Scorecard: How Does Your Utility Rank?

What is Lighting as a Service LaaS? Should You Use it for Your LED Lighting Retrofit?

Discover How Much You Can Be Saving

“We actually had a couple of employees say thank you for turning the heat up, we hadn’t turn the heat up all we did was move the air around, that...

The federal solar investment tax credit (ITC) is a tax credit that can be claimed on federal corporate income taxes for a percentage of the cost of a solar photovoltaic...

Continue Reading
Article Wireless Power Monitoring: Where are you losing money at your facility?

You may know how the power at your facility is being consumed, but not how you can control or change that – with power monitoring you can. You’ll know if...