Solutions Projects Blog Contact Us GET AN AUDIT ENERGY CALCULATOR
Home
Blog
Lighting
LED vs Fluorescent: Which is better?

LED vs Fluorescent: Which is better?

Lighting at your commercial or industrial facility is important and crucial to keeping your operations moving. What you choose to light your building with can make a huge impact on worker comfortability, energy consumption, and the overall look and feel of the facility. You may wonder what are the differences between LED lighting and fluorescent lighting. Read on as we explore LED vs fluorescent lighting and look into the pros and cons of each.

What is fluorescent light?

Fluorescent bulbs are made up of a glass tube that is filled with inert mercury vapor. The inside of the tube is lined with a phosphor coating. When an electrical current flows through the mercury glass, the mercury gas emits ultraviolet energy which causes the coating in the tube to light up, producing visible light.

What is a CFL bulb?

CFL stands for Compact Fluorescent Lamp. CFLs first came onto the market as an energy-efficient alternative to incandescent bulbs. They get their “compact” name from their small spiral shape as opposed to the long tube shape of traditional fluorescent lights. CFLs work the same way as their larger counterparts.

What is LED lighting?

LED stands for light emitting diode. Diodes are composed of two electrodes through which electricity flows through in one direction.

What is the difference between a fluorescent and LED light?

Both LED and fluorescent lighting are more energy-efficient than incandescent light. An incandescent bulb is what most would consider to be a traditional light bulb. An incandescent lamp is made-up of a wire filament that is encased in glass, which is filled with vacuum or inert gas. Light is produced when an electric current is sent to the filament heating it up until it glows.

Here is a table that outlines their main differences: 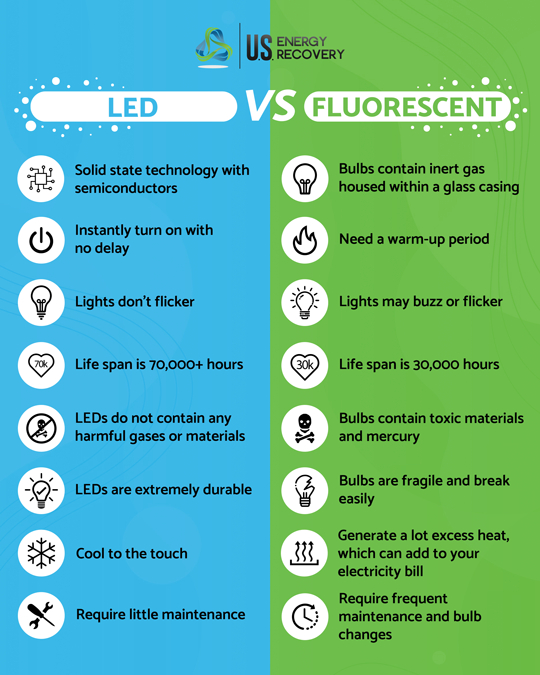 The table above may have given you a few hints as to which lighting option is best. The answer is LEDs.

LED lighting is the unrivaled choice for any commercial or industrial facility. An LED tube is more energy efficient and lasts longer than a fluorescent tube. An LED lamp is safer due to its lack of toxic materials and more durable than a fluorescent lamp.

Light emitting diodes are brighter than fluorescent light bulbs and can dramatically increase the light levels at your facility.

Lastly, LED lighting doesn’t cause headaches, migraines, or other health issues due to flickering or buzzing, like fluorescents do. Read about the 16 key benefits of LED lighting here.

LEDs cost anywhere from 40% to 90% less than fluorescents to run. At the same time, LEDs do not generate excess heat, which can add a substantial amount of money to your heating, ventilation, and air conditioning (HVAC) bill.

LEDs have the longest life span in the lighting industry. The average LED light bulb lasts 6 times longer than the average CFL bulb.

LED bulbs are not as fragile as compact fluorescent lights, and don’t require frequent replacement. Maintenance costs can add up. Consider equipment expenses, such as scissor lift rental fees, and the time and money it takes for an employee or hired electrician to deal with dead bulbs.

If you’re interested in finding out how LEDs compare to metal halide lights, check out our LED vs. metal halide article here.

What are the disadvantages of LED bulbs?

The only downside to LEDs when compared with fluorescents is the initial costs are more expensive, but costs have gone down considerably over time as the technology has become more established.

In the long run, LEDs are a definite better investment than fluorescents because they have a longer life span and are much more energy efficient. You will save money on your energy bill and on maintenance costs. If you consider all the extra expenses that go into having fluorescent lighting, you would end up spending more money in the end than if you had gone with LEDs in the first place.

The time it takes to recoup the difference in price after making an initial investment of LEDs is typically just a few months.

How do you decide what type of LED lighting to use at your commercial facility?

Now that it is clear that LED lighting is the best choice for your facility, how do you decide which type of LED lighting to use to optimize worker comfortability and productivity and maximize energy savings?

It is easy to become inundated with options when you begin to plan a LED lighting retrofit, but you can be assured with proper lighting you will reduce worker mistakes, prevent machinery accidents, reduce employee sleepiness, and decrease your energy consumption.

There are several factors to consider when deciding what type of LED lighting to install in your building. These include how many fixtures you need, how you want the light to be distributed, how bright you want the lights to be, and what type of working environment they will be used in. Take a more in-depth look at how to light a warehouse here.

U.S. Energy Recovery is a commercial lighting company built on finding ways to save our clients energy and money, while reducing their carbon footprint. LEDs in the commercial industrial lighting space is our core competency for a reason. We fully believe in the benefits of LED lighting and want to bring them to as many businesses as possible. Please reach out to us at (800) 834-8737 so we can help find the perfect LED lighting solution for you.

The Benefits of an LED Parking Lot Lights Retrofit

Solar PPA vs Lease: How to Decide Which One is Better for You

Industrial Fans for Warehouses: Why You Need Them

The benefits of LED lighting transcend nations, cultures, and levels of socioeconomic status. People living in the developing world are benefitting from replacing kerosene with safe LED lights so they...

When is the best time to do a lighting retrofit? A commercial LED retrofit can help bring big savings for the business. So before you think about any other investments,...

Continue Reading
Article Lumens vs Footcandles: What are the Differences, Which is More Important?