Solutions Projects Blog Contact Us GET AN AUDIT ENERGY CALCULATOR
Home
Blog
Solar
Solar PPA vs Lease: How to Decide Which One is Better for You

Solar PPA vs Lease: How to Decide Which One is Better for You

While solar power is undoubtedly growing in adoption rates for commercial and industrial facilities, not all businesses can afford to install a solar panel system outright. That is why there are solar financing options available where you don’t own the solar energy installation itself, but still have full access to the solar electricity generated.

This article will delve into the two most popular options: a solar Power Purchase Agreement (PPA) and a solar lease. Read further into this solar PPA vs lease article to find out which one is right for you and your facility.

What is a solar Power Purchase Agreement (PPA)?

A solar Power Purchase Agreement (PPA) is a financial agreement between the PPA company and the customer. The PPA provider will design, build, and install a commercial solar photovoltaic (PV) system on the customer’s property for little to no cost.

The PPA company will also maintain the panels. The PPA provider will then sell the energy the solar PV system produces back to the customer at a fixed monthly rate or for the electricity they use, depending on the agreement. The fixed-rate is usually reduced and lower than their current utility rate. A PPA contract will last anywhere from 10 to 25 years.

What is a solar lease?

A solar lease is a financing option where you don’t own the solar panels, but pay a fixed monthly payment to the solar company for use of the solar system. With a solar lease, the solar installer will be responsible for the design and installation of the solar energy system.

The solar company will also take care of the necessary maintenance of the solar system. You essentially are swapping out your electricity bill for the fixed monthly payments to the solar contractor. Solar leases typically last anywhere from 2 to 20 years.

What is the difference between a solar lease and PPA?

A solar PPA and solar lease are similar so they sometimes can be mistaken for the same thing. With both solar PPAs and leases, you won’t have to deal with any upfront costs since you won’t be buying the solar panels.

You also won’t own the solar equipment or solar array, which means the solar company you work with will be responsible for the design, build, installation, permitting, and maintenance of the solar system on your site. In both cases, you can lock in your utility rate as per your agreement with the commercial solar company you choose to partner with. 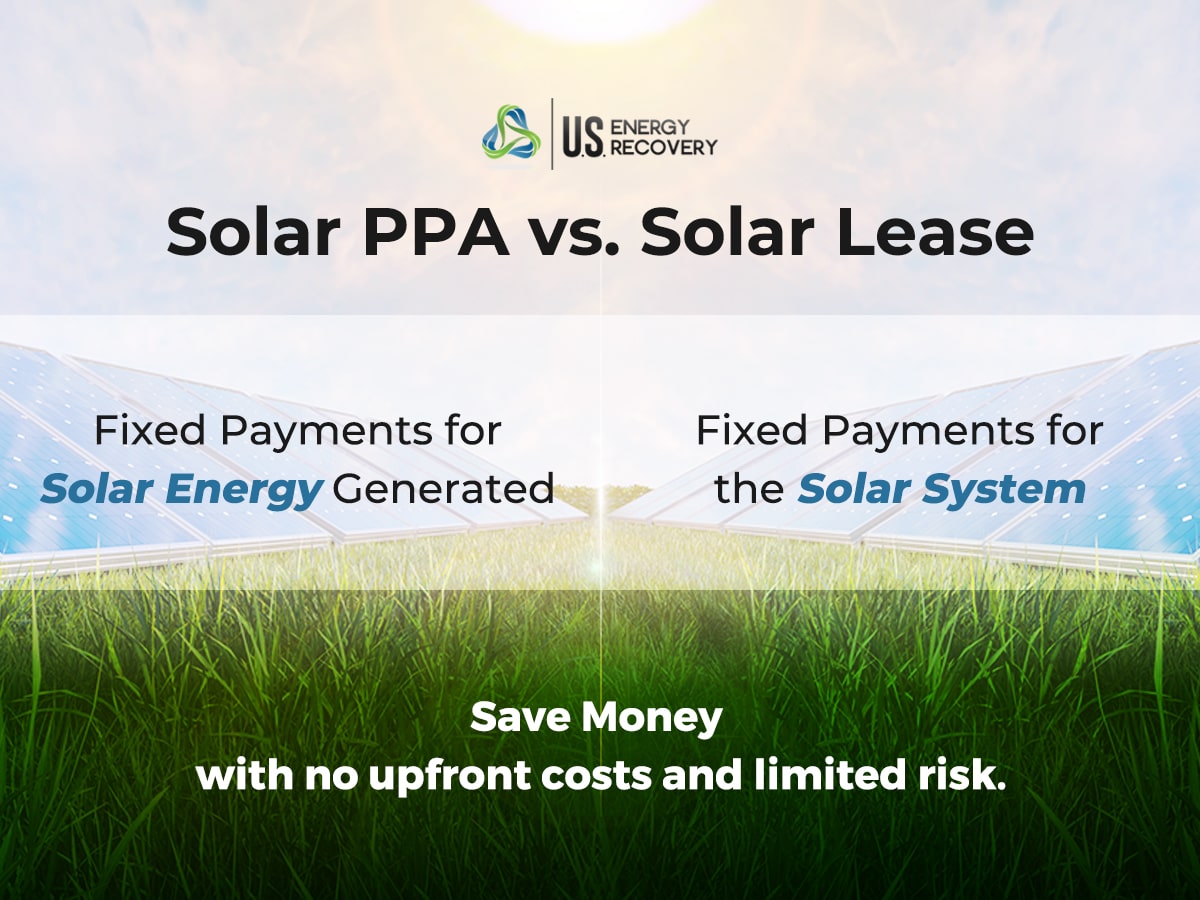 What are the pros and cons of solar leases and PPAs?

Since solar PPAs and leases are extremely similar financing options their pros and cons are relatively the same. It just comes down to whether you prefer to pay for the solar power generated from the system or pay for the solar system itself.

The pros of solar leases and PPAs are:

The cons of solar leases and PPAs are:

What is the best option for your facility?

As you can see from the above lists, leasing solar panels or going through a solar Power Purchase Agreement are both excellent ways to avoid a large initial investment and still be able to reap the benefits of solar energy. Solar leases and PPAs work for commercial and industrial facilities because a fixed cheaper rate for solar electricity and not having to worry about ownership of the solar PV system outweighs any of the cons.

At the same time, going through a solar lease or PPA ensures the whole process will be quick and painless. Since the solar company you work with will be taking care of the entire commercial solar installation, you can just sit back and watch it all come together. On top of all the above-mentioned benefits, you also won’t have to worry about the maintenance and upkeep of the solar system.

U.S. Energy Recovery is a commercial solar company dedicated to its customers and their goals for energy efficiency. We strive to take care of all the heavy lifting when it comes to installing energy-saving technologies at our customers’ commercial and industrial facilities. This way our clients save time and money while improving quality control and productivity.

How to Calculate Your Electricity Bill for Commercial Facilities

What is EV Charging as a Service?

How to Reduce Power Consumption of Motors

Your facility could really benefit from solar

Article What is the California SGIP Rebate and How Can it Benefit Your Business?

Energy storage systems are most commonly paired with solar energy. Solar is the most readily available resource for battery storage. Other resources include wind and pumped hydro, among other renewable...

If you have a solar energy system or solar photovoltaics (PV) array at your facility, you know how much money solar panels can save you on your electricity bill if...

Continue Reading
Article How To Protect My Business From Future PG&E Power Outages?

So how do you protect your business from this imminent threat if you’re a PG&E customer? You need back-up power – a power supply that can instantly take over if...